I did a book thing.

If you haven't already heard, yours truly is now a published author!

As of the morning of Monday 14th March, anyone can click onto the Amazon bookstore, and buy a copy of my pocket-book about imposter syndrome (and why everything we think and know about it is probably wrong). 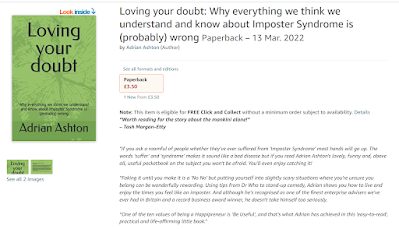 Doubtless I'll be encouraging and sharing teases about the book and its full set of ideas, approaches, and tools in posts elsewhere across the social media-verse over the coming weeks (and possibly months), but I wanted to pause here to reflect on why a book, why now, and how I 'did it'.

Why a book and not a blog, as I've done with all the ideas I have?

A couple of years back, I found myself starting to think about the subject of imposter syndrome following an assertion a speaker made, in a workshop that I was sitting in on.

Normally, as you may be aware, I would then take to this blog to expound upon the idea, as I've found the process and habit of working it through/writing it out in this format quite useful for me. Except this time I quickly realised that the idea was going to be bigger than one of my usual blog posts. And it needed more thinking to work it out.

So I hit on the idea of approaching it as if I were going to write a book about it. And when I'd finished doing the extra researching and reading around it, and getting all my notes and workings out together, I was happy that I'd worked the idea out. But I was then left with a book.

I've always thought that knowledge does more good when shared (even if it's only for people to disagree with it), so the logical thing to do seemed to be publishing it.

I've never felt that any of my previous ideas were strong enough to warrant developing to the point that they could become a book - as other posts in my blog, and videos on my youtube channel will attest to...

But as anyone who flips through a copy of the book might realise, it should really have been 6 months ago, rather than 'now' (March 2022) when it hit the bookshelves. It was pretty much done then, but the truth is that I started to procrastinate. Perhaps understandably so, as I'd never written or published a book before. So, like most things we do for the first time, there's a certain sense of fear and trepidation which starts to immobilise us. I'm sorry to say I let myself remain immobilised for longer that I was happy with, but now I've done it once, if I ever do it again, it'll be quicker to get to print!

And the process of 'doing it'?

I decided to try and keep things as simple as possible.

I invited a select few people to review my final draft for sense (all of which are name checked in the books' thank-you list, with the influence that they had on the original idea). All of them were positive about the ideas I'd presented and argued, and a few even offered comments that I've used as the blurb on the back cover to it.

I also didn't read any of the existing books, or watch any of the many youtube videos on how to self-publish your own book. Not because I don't think the people who've done them aren't trying to be helpful and encouraging to others, but because I'm not publishing a book as part of some grand plan or ambition - it's simply an unintended consequence of my starting to work out what became a bigger idea than I first thought it would be. And as such, I'm not too concerned with making sure I do things in ways that we're all supposed to be doing them, or that the system is set up to help promote (after all, everything else in my business model and how I work usually seems to defy and go against accepted wisdom, so why should this be any different?).

I self-published using KDP - which may not be without some controversy for some, but it felt very simple and straightforward to copy my text into their template, pick a template cover design (I realised part of my procrastinating was in trying to edit and format what I thought would make a neat cover in Word, into a file format and design that I could upload, but ultimately, I want people to read the content, not admire my attempt at design).

I've also realised that self-publishing in this way sometimes means that the formatting I'd originally created didn't always exactly map across into the KDP platform. But, again, I resolved that I would rather it be a bit 'rough around the edges' and at least out there, rather than my still be tinkering with it weeks (or even months) from now... and depending on how its' received by people who read it, there's always the prospect of a 2nd edition in the future for me to go back and tidy up all those bits.

For now there's also no epub version - only a physical paper copy. That's because I personally prefer to read any book in this format; because I think we risk spending too much time staring at electric screens as it is; because its easier to physically write in/deface physical books; and because somehow electronic books never quite smell right...

Finally, I've set a price which has already been referred to by others as 'ludicrously low'. But as with everything else in this process, I never set out to publish a book, but rather to work out an idea and find a way to share that with other people. The price is based on the average price of a coffee or pint of beer, that, if we were to meet in person and chat through the idea, would be what you would hopefully be inclined to offer me in exchange for my time. So why charge you more than that?

At the time of posting this blog, I'm still yet to have a physical copy of it in my hand, but encouragingly, I've had several requests from people for signed copies already!

Posted by Adrian Ashton at 2:11 PM