sitting in the bath; jaffa cakes; and b0llock sticks - what it takes to get on my (not so) secret Santa list this year

Last month I committed to being a (not so) secret Santa for some of you out there.

The good news is that I've now dispatched 4 lots of surprise random gifts - the bad news is that I'm a little concerned as to what some of you are now expecting of me...

To recap - the criteria for getting onto my 'nice' list, and have something come through the post to you, was that you interact in some way with any of my activity across social media between then and the last week before Christmas.

And to date, the replies and comments that have meant their contributors have had early festive gifts have been: 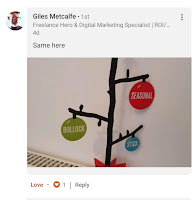 - someone revealing my secret ability to eat a whole packet of jaffa cakes within seconds;

- people wanting to see me do youtube clips while in the bath (I already do some whilst sat on the toilet);

- celebrating the historical roots of caffeine fuelled networking (aka theRSA);

- and sharing images of their seasonal b0llock stick tree.

Thankfully it also seems that what I'm able to send out is being well received - and there's still time for you to share in my festive efforts: my last 'draw' will be on Friday the 18th December, so go start scrolling through my posts on Facebook, LinkedIn, Twitter, Instagram, Tumblr, Pinterest, YouTube, Medium, this blog, and anywhere else I may be loitering with seasonal intent...
Posted by Adrian Ashton at 2:17 PM No comments:

why the lifeline of SEISS may bankrupt us next year...

At the start of the pandemic, roughly 5 million of us were self-employed.

Only after what seemed an eternity of panic and doubt, did government make an equivalent scheme for us in the form of the SEISS (except about half of us aren't actually eligible to apply for it!).

At the time, may argued that this was further evidence that despite their rhetoric about entrepreneurship, the current administration don't actually understand or care about us unless we're employing lots of people (despite the fact that we pay more tax than our employed counterparts, and other types of business owners). And this led to lobbies, campaigns, and the formation of #ExcludedUK to try and challenge this discrimination.

For those of us who are eligible, the SEISS grant was a lifeline (because even if we can land paying work, we all know it can sometimes take months to get paid which means weeks of little, if any, income to keep the lights on with).

But for those of us who began breathing sighs of relief, having gone through the small print and talked with others who haven't, we may actually be worse off next year for having received it, than if we'd not been eligible for it in the first place...

Unlike the business rate grants and employee furlough schemes, the SEISS grant carries a clause that says we may have to pay it back if HMRC deem that we managed to end this current financial year in a better place than we feared we would (perhaps because in the last few weeks of it, we suddenly land a large contract or finally get paid those back-invoices we never thought would be honoured). But we don't know exactly what the threshold for that looks like, or might be, beyond terms and phrases that are as equally vague as "substantial meal" is for pub landlords. 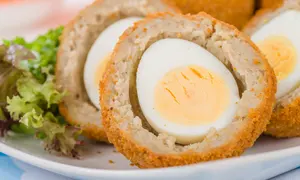 We'll only know if this is the case after we've done our tax returns, and as the SEISS grants are taxable, we'll have already paid about 20% of them back as tax.

So if HMRC deem that we shouldn't have received the grant after all, the SEISS amount will magically transform from a grant into a very short-term loan that carries at least 20% interest - 20% being the amount we've already paid in tax on it, and then there's additional interest on the full amount again unless we repay it straight away. It's cheaper to take a bounce-back loan, or arrange  (and you have more time to repay it).

Lets say that you also pay child maintenance through the Child Maintenance Agency. They calculate what you should pay annually, based on your last tax return. Which means that for next year, the SEISS grant(s) you received will be counted as part of your income/earnings (because it's taxable income), pushing you into paying a higher amount of child maintenance. But if you've had to pay the grant (plus at least 20% interest) back, then they've fixed your amount too high. You're already facing the threat of legal action from HMRC to repay money that you no longer have, and now are also being forced to pay levels of child maintenance that haven't been worked out properly that will stretch you even further than you are now.

The pandemic and lack of government support for the self-employed has already seen nearly half a million of us giving up our enterprises, with many more seriously considering doing the same by the end of this year.

My concern is that the SEISS grant that initially seemed like a lifeline to some, actually shows that the government who've designed them have a contempt for people who are self-employed based on larger business owners and salaried workers not facing any such fears, because of the grant support they've received has no such risks attached.

All we've ever asked for as the self-employed is parity with our employed counterparts (who already enjoy far greater privileges than us in terms of lower taxes, pension contributions, better pay, and such like). Initially this parity was about making sure we can all have access to some form of support, but maybe we should also be asking for this support to be equally non-discriminatory in the risks it forces us to take when/if accepting it?

and so the panic of having to repay these grants begins (but still with very unclear guidance...): https://www.gov.uk/government/publications/penalties-for-not-telling-hmrc-about-self-employment-income-support-scheme-grant-overpayments-ccfs47