and the least sustainable legal form of social enterprise is...

Anyone who's ever asked me for (professional) advice or guidance will know that I always try refer to what published research has to say about your question - I'd much rather offer option and direction on the basis of objective evidenced knowledge, rather than any personal preference or other bias.

And many know that I also seem to be able to make sense of all the options around legal forms for social enterprises here in the UK (at my last count, 14 options that fall under 7 regulatory bodies depending on which you pick) - something which has led me to be invited to develop and deliver training courses throughout the wider sector, be interviewed for webinars, and also offer some of my famous beer/cake mentoring in relation to as well...

Historically, when helping people navigate these choices as to their legal form, I've always referred to the legal powers of the respective regulators, what published research shows about their apparent success in being awarded grants, and their relative 'popularity' based on sector mapping studies.

But today I add another dimension to this referencing and research about social enterprise legal forms - how they affect your future financial performance!

Given the complexities around understanding and mapping the wider world of social enterprise, there's scant research or monitoring around how any enterprises' chosen legal form may impact on its future potential for success in financial terms - and while there are lots of other contributory factors which means that we can never look at the legal form as the sole indicator of this performance outcome, I felt it might be useful to take an initial look at what the studies that are starting to be published might be suggesting.

To this end, I'm indebted to Power to Change's research team, who have started to track and publish bench-marking data for social and community enterprises around a number of themes, but also a couple of other bodies too. There's not many sector mapping studies that look at the performance of an enterprise correlated to its legal form, but the initial ones I've been able to draw on are:

And yes, the data from these will be subjective - for example, Power to Change will only be reporting on data from social/community enterprises that it has directly engaged with and supported; but as I said already, this is a first go at seeing what might be gleaned and identified from cross-referencing what these studies and mappings appear to be finding.

And what they seem to show is:


The biggest surprises though, come in relation to CICs - the Power to Change study shows them to have an average turnover of nearly £2m, but the CIC Associations own mapping found the vast majority generate less than £10,000 a year. This clearly shows that there's HUGE variances between individual CICs that are trading: there are a few 'unicorns' out there, but most are 'zombies'.


And I use the phrase 'trading' loosely, as these various studies also highlight that CICs are the most grant reliant and dependant of all the legal forms (58% of all income is grants - for comparison, it's 53% for charities; and grants are used as the main route by the majority of CICs for raising any investment). Worryingly, they are also the only legal form whose average enterprise seems to be generating a loss - Power to Change's mapping found that the average CIC makes a loss every year of -1.5% against its income...

I've blogged before about how the 'honeymoon' for CICs may be waning, so does this add further weight to my concerns about the viability of this legal form to best enable social entrepreneurs to achieve their vision? (especially when 1/3 of all CICs also report that this legal form has been a hindrance to them doing so...).

I don't know, and I don't think that this quick snapshot across a handful of others' published data can offer any real answers. But what it hopefully does is to help further add to our knowledge about the best routes through which social enterprises can best realise and fulfil their potential. Hopefully it will also generate more and more useful questions for those undertaking future studies into this wider sector.
Posted by Adrian Ashton at 3:10 PM No comments:

if you want support for your startup, you'll likely need to ignore your ethics...

I find myself in an unusual conundrum as an enterprise advisor who also has a pretty explicit set of values and ethics in how I approach the way I work:

Over the last few years, government has consistently reduced the amount of resource and support available to people who want to start up different types of businesses as a route to employment, generating jobs, changing the world in new ways, and such like. This has meant that the support that so many entrepreneurs of all types need and value is increasingly scarce.
At the same time, high street banks and financial services bodies seem to be moving into this business support space through creating startup grant funds, developing (free) incubators and workspace, and sponsoring national thematic enterprise support initiatives.

All seems pretty straightforward? And economists would probably point to this as an example of how market forces are creating responses that people and enterprises need, without the need for state intervention. 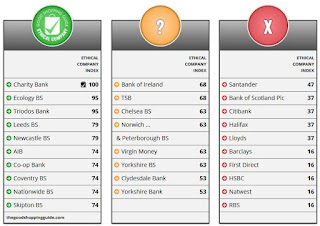 But here's the rub - a recent survey of the 'ethical-ness' of high street banks seems to suggest that those who are scored as 'most unethical' are the ones doing the most around these startup and social enterprise support initiatives. A case of 'buying your way out of a guilty conscience'? (http://www.thegoodshoppingguide.com/ethical-banks-and-building-societies)

And for the entrepreneurs accessing this support - some won't care where the money's coming from, but I see that people increasingly are interested in how that money has come to be on the basis of choices about where they choose to invest their own savings, suppliers they choose to procure from, and the places they try and recruit their staff from.
Market forces are all well and good, but remember that the market isn't a person - it doesn't have ethics or values like you or I. And that likely means that entrepreneurs' difficult choices will only be added to in the future when they start to weigh up the ethics of accepting the support that they know that their enterprise needs, but comes at a cost of having been raised from investing and trading in practices that they'd otherwise be very uncomfortable with...

Posted by Adrian Ashton at 8:50 AM No comments: