are community businesses starting to fail, or are we simply becoming more honest about the true nature of them..?

A few years ago, there was a jamboree around 'community businesses' - enterprises that are led by the community they're based in; operate and trade to meet the (social and health) needs of those local areas; and generally make that area a better place for everyone to live and work in it.
This was precipitated by the formation of Power to Change - a charitable trust whose remit is to nurture, encourage, and support the growth and impact of this sector of businesses.

Over the last 5 years since it's creation, Power to Change has initiated a range of programmes and support, which have, in turn (and to me at least), seemed to also catalyse a range of other good things starting to happen through other support bodies to the sector.

However, one of the things about Power to Change that's impressed me most, is its commitment to research, data, and openly sharing it's findings. I've drawn on some of these published findings in previous blog posts, in exploring what they can add to other researches and data from other bodies in seeking to better understand specific themes, but this time thought I'd look at their own data on the community businesses they exist to support, from a longitudinal perspective.
I've always thought that having more than a "this year vs. last year findings" is important in any context as it means you can better start to identify trends, blips, and other happenstance events (last time I did this it was on complaints received by the CIC Regulators against individual Community Interest Companies, the findings of which still cause shock amongst people I share it with...)

And when I look at the 4 years worth of 'State of the Community Business Market' reports that have been collated and published to date, I can't help but wonder if we shouldn't be making more noise about the general state of community businesses, and in particular, how the sector appears to be worsening...

As some who've read previous blogs of mine may recall, I don't claim that analyses like these are based on sophisticated or technical regression techniques and other sensitivity analyses in data sets, but merely what a regular lay-person might find if they were to apply some basic maths to the headline figures reported.

In this instance, I took the figures from the last 4 years of reports, and worked out the average (mean) figures of what a typical community business looks like from the headline figures in each - the charts highlight the story, but in summary:

1) there seems to be a general overall increase in the numbers of community businesses (up 2,000 over the last 4 years), but...
2) the average income of community businesses has fallen by nearly £20,000 (roughly 10%) over the same period;
3) the average value of assets they hold each has fallen by over £150,000 (roughly 60%);
4) they're employing 20% less people, and, before anyone points out that that's because they're making greater use of volunteers - the number of volunteers has also fallen too (by around 50%)...
5) they're also becoming more reliant upon grants over trading to help sustain themselves, and continue their activities into the future 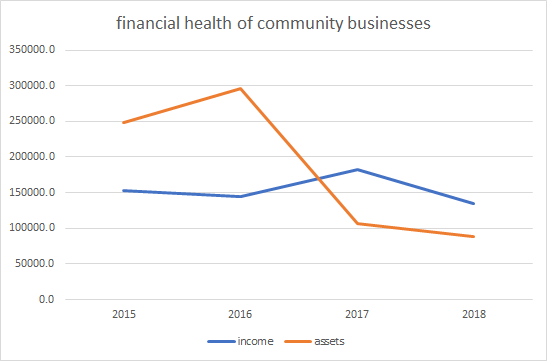 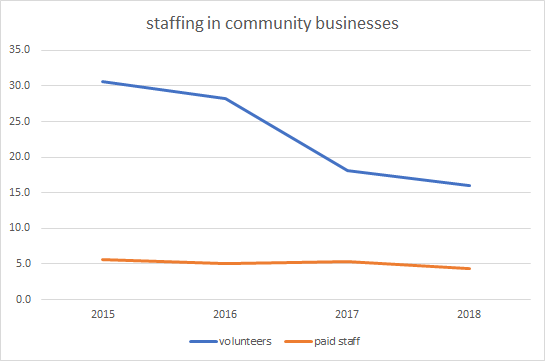 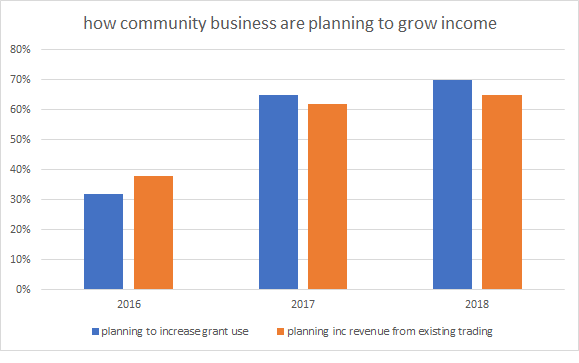 Now, it may be that this is all easily explainable: in the reports themselves, Power to Change are very clear and open that each year the methodologies used to research and generate the data are changing - so there's a strong argument to debunk the above on the basis that I'm not comparing like-for-like. Except... for the figure about the overall number of community businesses which seems to be on an upward trend - if anything, this would suggest that the methodologies are actually getting more effective and precise in identifying and profiling community businesses.
And if this is the case, then that surely means that a combination of things may be going on:

1) the strength and scope of community businesses, upon which national policy and investment programmes have been based, have been over-estimated, which means that the support now available isn't actually what's most needed...

2) Power to Change has been 'too successful' in inspiring a faster than historic growth in the sector of new community business start-ups, whose financial and operational standings will be far more immature (weaker) than their more established counterparts, and this is skewing the overall averages - although the age of community businesses isn't something that's closely monitored in these reports, parallel mapping by Social Enterprise UK highlights that most of the wider social enterprise sector (of which community businesses form a part), are disproportionately 'young' in comparison with private businesses).

So - all in all, a false alarm for community businesses after all?

Maybe, but as I pointed out earlier, I've done this rough analysis on the basis of how someone taking the headline figures from these annual reports might look at them (and perhaps be unwitting misled?)
And given that other national support initiatives, investment, support, and funding programmes usually take a year or two to 'roll out', in light of them being potentially based on flawed assumptions and data, will this mean that they 'miss their mark', unless they regularly pause to reflect on findings such as these about the wider sector that they're working in, and respond accordingly..?
Posted by Adrian Ashton at 4:17 PM No comments: