the tension of being British and winning business awards

Anyone who's snooped around my website, or followed some of my social media feeds, will likely have noticed that from time to time I'm fortunate to be recognised through receiving various national and international awards. 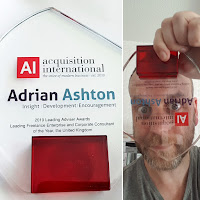 As a sole trader, such recognition is really valued: I don't have a line manager, team of colleagues, or regular gang of work mates whom I go out after work with that would otherwise help reassure me in those moments where I doubt myself, and wonder if I really am as good as I seem to be (hint: impostor syndrome is much more common amongst freelancers than people like to publicly admit). So such validations are genuinely welcome, and hopefully also an encouragement to other fellow freelancers and self-employed, that we really can achieve great things despite sometimes feeling like a flea when compared to the likes of larger firms and companies. 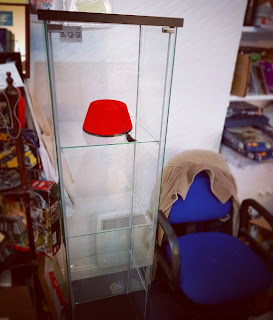 But recently I've started to notice that there seems to be something 'a bit British' about such business awards: whenever I learn I've been shortlisted for something, I'm keen to share that news as encouragement to others (and also reassurance to clients that they've commissioned the right consultant!). And if I'm fortunate enough to impress the judging panels sufficiently for them to put my name on the trophy, there's a similar post (although not always traditionally posed...) to share my excitement. And what I'm starting to notice is that there seems to be more interest and 'well done' messages when I share news of nominations and short-listings, than there is if I get to subsequently add another 'paperweight' to the trophy cabinet.


And I'm wondering if this is a reflection of our culture as Brits - try hard, strive to succeed, always root for the underdog (in this case, the sole trader who's up again international consultancy firms), remember it's more important to take part than to win, and don't get too cocky...
But is that a bad thing? After all, it's complacency that is usually at the root of businesses that start to struggle and fail, and that's something I'm very keen to avoid (even though I've managed to remain self-employed for nearly 15 years now, I still fret about being able to find the next paying client or that my invoices will be able to be paid...) 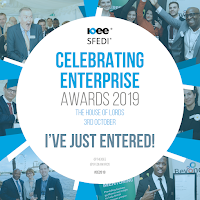 So maybe we should focus more of the celebrations not on the winning of awards, but on those who get nominated and shortlisted (which is often no mean feat to achieve in itself).
As for me? I'll still keep sharing news of awards nominations and additions to the mantelpiece, but won't be upset if you decide not to comment or like the posts I make when I share the news of it as encouragement to others.

Posted by Adrian Ashton at 1:41 PM No comments: