"I couldn't tell who was in the room, and who was on zoom.."

Last weekend, I was part of supporting a hybrid conference - which was about how we 'do' hybrid (hope that's not too meta of a concept to open a blog post with?) 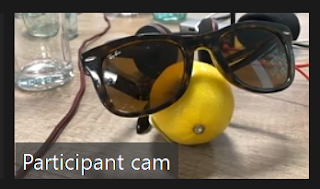 As a facilitator who's part of the IAF England & Wales team, earlier this year we were considering how to re-assert ourselves as a body of practitioners, and also re-spark our community of facilitators, after being without our customary annual conference for the last 2 years (Covid, and all that).
Someone (possibly me) suggested that we do it as a hybrid event - giving us the chance to share, try out, and learn from others how we do events where people are both 'roomies' and 'zoomies'. 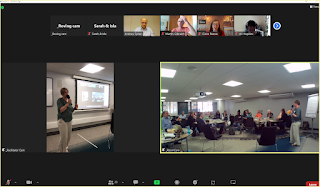 And while there's lots of other posts people are making about their experiences of it across social media, expressing how having it as hybrid was far more enjoyable and engaging than many were fearful it would be otherwise, I wanted to pause to reflect on my experience of leading a session about how we do networking in hybrid ways. 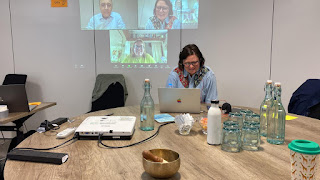 Given that we all know (in theory) how to do networking in person, and we've started to feel our way with it on-line in breakout rooms, etc over the last 2 years of pandemic, I wanted to try out the notion of doing it 'hybrid' - where the people networking together are both on-line and in a room at the same time.
I also wanted to explore some of what each side felt like they were missing out on, in not being in the others' physical/virtual space.
So, as part of the session, I posed a flipped question to both groups - what did zoomies feel they were missing out on, by not being in the room; and what did the roomies feel they were missing out on by not being a zoomie.
Interesting, there were lots of frustrations and FOMOs expressed on both sides, but in 'headline':
- if you're on-line in a hybrid event, you miss the spontaneity and potential for physical contact with other human beings;
- if you're in the room at a hybrid event, you can feel more vulnerable and at risk from not having access to your usual home comforts, and having less recourse to being able to 'get out' if you feel they need to. 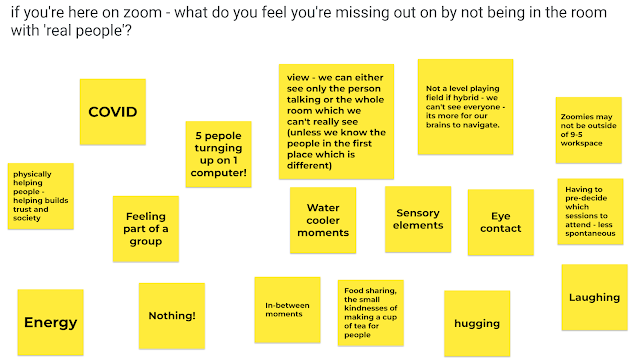 So - some good learning that highlights that not everyone is keen to rush back to doing everything in person (or if we are, we need some careful considerations).
And there was also lots of other great learning throughout the conference about the realities and practicalities of both managing, and being part of, hybrid events.
(SPOILER: despite our not spending any money on tech, and the venue not being set up for hybrid, we managed to lash-up makeshift roving cameras and mics in ways that impressed everyone both on and off line, showing that it doesn't have to be that technically difficult).
But for me, the key message from my session wasn't about how to run hybrid networking in a tech way, but in how I approached it as a facilitator in recognising that there were 2 groups of people with different different starting/engagement points.
Encouragingly, how I planned the session and facilitated the networking seemed to work really well for people, with comments being made afterwards such as:
- "this experience has made me more confident about doing things in a hybrid way"
- "when we were doing the networking, I hadn't realised who was in the room/on zoom until afterwards!"
So for anyone who's either planning, or thinking about being part of, a hybrid event - my takeaway would be this: as important as it is to get the tech doing the things you need/want it to, it's just as important to also think and plan how you're going to structure the sessions and activities within it to help everyone feel part of it, regardless of how they're joining it.
Posted by Adrian Ashton at 8:05 AM No comments:

why, as a freelancer I'm paying to offset my carbon footprint

My recently published impact report on myself introduced something new for the first time in the 16 years I've been doing it - commitments and targets to revisit and report against in next years (which will be due sometime in April 2023: watch out for the #AAimpact23 tag!).

Around this time I've also been leading a bootcamp for businesses who were wanting to do more around their environmental impact. And whilst they all started that journey thinking it would be the carbon footprint of their products, they all started to realise that in some instances the way that they ran their businesses was having a biggest cost to the environment than what they were selling to their customers.

And these two things came together around one of the KPIs in my impact reporting framework (which has also been one of the first measures I started using all those years ago...) - trying to consider my impact on the natural environment by tracking how far I've been able to avoid needing to make journeys 'in physical person', and so avoiding adding pollution from not needing to burn the fossil fuels that go into the petrol tank of a car, and the diesel for a train.

I've reflected on one of the unexpected outcomes of this practices and indicator in a previous blog - but I've caught myself increasingly asking 'so what?', against this measure: what's the point of measuring something if we don't do anything with the number it gives us (other than stroking our ego and vanity)?

So to this end, I've decided to use this metric to help me calculate the carbon footprint I'm creating when I can't avoid having to make physical travel to a client to deliver workshops, facilitate meetings, and such like. And with that tonnage figure, I'm then going to offset the carbon I've created by purchasing 'carbon credits' that can be used to invest in different projects and initiatives to try and 'rebalance the scales'.

But even now - so what? I'm a sole trader, and it's unlikely that the carbon footprint I generate from business travel will amount to anything remotely approaching significance in the context of other business'; and by association, what I'll pay to rebalance it will seem paltry in a global scale. So why should I bother? It'll only cost me more as a business, and won't have any meaningful impact on the environment.

The point, dear reader, is this - if we don't each take a stand and start to model the behaviours that we want to try and encourage and challenge others over in seeing a better world come about, then what credibility do we have to bemoan the state of the world? If we don't 'walk the talk', why should anyone else? And ultimately, if we resign ourselves to the mindset of "I'm too small to make any meaningful difference", just remember what's possible when 1 person stands up - it can inspire others to do the same, and so sooner or later, change happens.

So in hopes of encouraging and challenging others in this endeavour, I'm going to start adding a rider to my client invoices and proposals: "any physical travel involved in the delivery of this work has been carbon offset at my cost as part of my commitment to helping to sustain our world for ourselves and future generations."

Posted by Adrian Ashton at 8:43 AM No comments:

why are the new wave of start-ups being called the purpose-led ones, when they aren't?

I'm not sure if it's because of the types of circles I usually find myself moving in, or the bias of how stories are reported in the media, or because there really is a general sense of it, but it seems that we're in a period when most new start-ups are being referred to having 'purpose' (and more so than existing/previous waves of start-ups)?

If this is really true, then I'm wondering where are all these new businesses who apparently are motivated by their values and wanting to create impact actually are:

- and the most frequent search by type of business offer being started is for clothing. And whilst I agree that there are some needed and 'proper' things happening in this industry (labour behind the label, for example), this is an industry that's also strongly associated with a plethora of negative impacts (the cost of 'fast fashion', etc)

So, based on the data from the biggest search engine in the world, these new waves of 'purpose-led start-ups' maybe aren't as prevalent as is being otherwise suggested to us.

Or maybe they're simply not using google to do the research they need to launch their new ventures like the rest of us do?