"we're going to sack our accountant and swear more..."

I had the pleasure this afternoon of spending time with the soon-to-be-graduating cohort of the School for Social Entrepreneurs North West's #scaleup programme - over the last year, this group of social entrepreneurs and social enterprise leaders have been exploring how they might best grow their respective ventures to create even more transformative impact in their local communities. 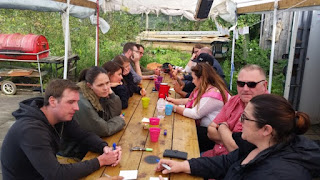 I'd structured my session with them to be largely open so as to offer anything that they might still need to learn with regards to specific pieces of information, contacts, and suggesting approaches to issues that they might not have considered before (including encouraging them all to watch Yes, Minister!). But principally I wanted to help them to formally reflect with each other on what they'd got out of being part of #scaleup, and what they'd be taking from it as they entered the next stages of their respective journeys, both personally and as an enterprise.

Many took the time to personally thank me as they left the session (always a good sign!), but what I felt was most useful from the session from my perspective was asking them all to share what one thing they'd now learnt that they didn't know when they woke up this morning, or one thing that they'd now do as a result of the day. This helps me understand the impact I've had, and while some of their responses were encouraging, I can't help wondering if I may have (accidentally) gone too far with some of them...

Posted by Adrian Ashton at 7:12 PM No comments:

I always try to support enterprises at whatever stage they’re at, and with whatever aspirations they may have – to this end I’m an approved/registered provider through a number of programmes, including Big Potential:  a national programme enabling social enterprises better explore and pursue social investment as a means to support their growth aspirations.

Usually, such support programmes only reflect on their success and impact at the end of their life, but encouragingly some, like Big Potential, are taking a more dynamic approach with annual evaluations to help them enhance their impact over their lifetime.

And Big Potential has recently released the first of its annual evaluations on its performance, and me being me, I wondered what its findings might tell us if taken with some additional external benchmarking (something which many programme evaluations omit to include). And that’s because without this benchmarking it’s hard to gauge how far any evaluations' recommendations may be pertinent in the wider context of the population of enterprises they’re aiming to engage and support.

So, what did I find?

Well, there’s lots of mapping of social enterprises that are published annually, but these are usually exclusive to particular types of social enterprise (co-operatives, development trusts, etc) rather than all of them (which Big Potential is concerned with), so I chose to look to Social Enterprise UK’s latest published mapping as the most relevant benchmark. Admittedly, it’s from 2013, and while a refresh of it is scheduled for sometime this coming autumn, as an initial rough reference I felt it’d serve its purpose for doing some comparative analysis over lunch...

And rather than bore you with various comparison tables here, there’s some striking headlines that seem to appear when you compare Big Potential’s profiling of the social enterprises they’re engaging with against the wider population:

3)  they’re more hyper-local: the proportions of Big Potential’s social enterprises whose reach is at both neighbourhood and local authority area is higher than the national trend.

So – is Big Potential seeing a new class of social enterprise emerging: new kids on the block who are much more locally focussed and ambitious that the wider sector is? But is there also a potential concern regarding that ambitious growth within this: if their reach is so local, that surely means limited potential for future growth, unless they start to monopolise local marketplaces and so reduce provider diversity and choice?

Of course, this is all highly tentative based on some headline published figures from the first annual snapshot of a new programme that I’ve looked at over a cheese sandwich, but it does seem to suggest that Big Potential is getting it right: it’s only capturing those enterprises who are ambitious for growth - an ambition that isn’t necessarily reflected in the wider sector with nearly half of all social enterprises who approach Big Potential being deemed to be ineligible to apply for support, and only 1.5% of those who are, going on to make a successful application. I'm looking forward to their next years' evaluation and the updated mapping of the wider sector to see what might come next...
Posted by Adrian Ashton at 1:45 PM 1 comment: