I've never made a secret of my personal views about the Community Interest Company legal form that was designed by the government to better support and encourage social enterprises - but I've also always been clear that if there's a clear advantage that it can offer to an enterprise based on their specific circumstances, then I'm happy to throw my weight behind them in making sure that they gain this status.

Over the years I've been asked on numerous occasions by CIC's how they might 'un-become' a CIC after its become apparent that they've incorporated with this form on the basis of poor or mis-informed advice. All have then come to realise that the hassle and implications to undoing this form outweigh the cost of their carrying on with it. All, that is, until recently when I was invited to formally meet with the Directors of a CIC to help them decide if they should dissolve it, after they felt that this status was hindering more that helping them.

It transpired that winding up the CIC was the best thing they could do - because having this status was actually damaging their potential to achieve their social goals:
- partner organisations (including some statutory agencies) just didn't 'get it' so they were wasting time regularly educating different people in the same organisations as to what it meant to be a CIC,
- the investors they were targeting didn't want to get involved because of the statutory caps that would limit their return to below market rates,
- through customer dialogue it had been identified that all the contracts that they were winning were on the basis of the quality of their service and had nothing to do with their legal status or identity as a social enterprise,
- and perhaps most dangerous of all, there was a culture emerging of 'just doing enough' rather than striving for excellence as owing to those statutory caps and the asset lock, staff didn't feel motivated to take risks or put in the extra effort that can make or break a growing enterprise as there was no mechanism that would allow their 'sweat equity' to be rewarded at at future date...

So - the papers have now been signed and the process of dissolution is formally in motion. By the end of the month there'll be one less CIC on the register.

But why share this story of apparent failure in the otherwise rosy world of social enterprise? Because sometimes things go wrong because we're offered bad advice and guidance and don't always know how to spot it; because legal forms can sometimes put the success of an enterprise at risk through no fault of its own; but mainly because sometimes we need to be told its OK to feel that what everyone else is raving about as being brilliant isn't working for you.
Posted by Adrian Ashton at 9:41 AM 4 comments:

the paradox of taking holidays and why tents need plug sockets...

So - its September and I missed sharing any insights or encouragements last month. Sorry about that, but I've a great excuse - you see, I was technically 'on holiday'!!

Holidays are a strange feature in the third sector - if asked, just about all of us would agree how important it is that people are supported, nurtured, encouraged, and that includes being well rested: taking holidays! But for those of us in formal leadership or senior management roles, lets face it: how easy is it really to be able to give ourselves those things that we're prioritising amongst the people we're supporting/working with/walking alongside? 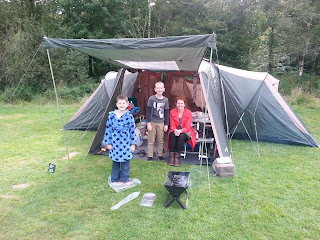 Well, this year I was away for a whole week and 2 weekends (mixture of camp-site and a friends' cottage in the South Lake District) - may not sound much, but was the longest official break I've taken from being self-employed for about 3 years. But every day, I trekked about half a mile to be able to get a signal on my phone to get for any urgent messages or emails - and despite scheduling client projects and contracts so that nothing should suffer for my absence, there were 2 contract opportunities that arose that I've missed because I'd promised my family that I wouldn't be bringing work with me (and frankly, working on a camp-site can be a tad tricky with precious few plug sockets!).

But I'm back and feeling good for having been able to devote myself solely to my tribe for that time - sharing new adventures and (mainly) enjoying spending time together. The only downside has been knowing how hard it was to be able to schedule just a week, and then seeing the 'out of office' emails from others in public bodies and larger private companies, saying how they're away for up to 3 weeks!!

Posted by Adrian Ashton at 11:46 AM No comments: