debt, decommissioning, and death - the dark side of social entrepreneurship...

As a sector, social enterprise always seems to be talking about upbeat and positive stories - you never really hear about chief execs running off with pension funds, administrators foreclosing the business causing the loss of hundreds of jobs, or things like the government having to bail them out...

And I've an idea that that's because as a sector, there's a lot of political agenda being acted out, and that's led to a sense that we can't talk about failure or difficulty - because that would go against the narrative that the sector is trying to present to the wider world.

But that's surely a dangerous thing? If we're not open about the 'tough stuff" that goes on - the failures, the losses, the pain, then how can we hope to develop a generation of social entrepreneurs who are truly realistic about the marketplaces that they're leading their ventures into, and what may be asked of them personally if they're to be able to make a success of it all?

There are signs of hope though - the rise of "FuckUp nights", a model of support to help entrepreneurs recover from failure, that we've imported from our American cousins. And I was also greatly encouraged from recently being able to participate in part of a 12 month national programme of support for social entrepreneurs: all the ventures being supported through the programme meet together once a month and the first thing they do is share what they've been struggling with - not as a ploy to gain faux sympathies, but as a powerful model to build supportive relationships through showing vulnerability, and allowing opportunities for their peers to reciprocate by sharing in turn when they've faced similar and how they tried to deal with it.

And the struggles people share aren't what you might expect based on the messages and stories usually coming out of the sector - it's a hard shock to some to hear about:


Social enterprise, like any other form of business, is tough. And we're surely only setting up future social entrepreneurs to fail if we don't encourage each other to be more open and honest about how tough it can really be sometimes?
Posted by Adrian Ashton at 9:44 AM 2 comments:

How far is my social impact reporting really 'fit for purpose'...?

Most people may be aware that to my knowledge I’m the only freelance consultant globally to openly and annually publish a social impact report on myself. And while it attracts widespread interest and applause every time I do, I always struggle to make sense of how well the framework I’ve developed is ‘fit for purpose’ (there is no reporting standard for sole traders), and how far I should take pride in my ‘results’ (no other freelance consultants’ generate impact reports to hold mine against).

While I’ve started to make some firm plans for addressing the bench-marking of results question from next year, I took the opportunity to take the Social Value Self Assessment Tool to see how well I’ve actually thought through my framework, measures, and overall approach - https://socialvalueselfassessmenttool.org

Like all ‘multiple choice quizzes’ there’s some assumptions and bias in the questions which I recognise – it assumes that you’re incorporated with staff (I’m not), that you have ongoing contact with a core group of customers (I very rarely do), and that you have a small number of activities you offer support through (I have lots…). However, it’s a useful starting point and echoes some of what I already suspected: that I’m highly transparent, but struggle to engage stakeholders over the long-term and so have access to wider data sets to help identify how far my contributions contributed to the final generated impacts clients tell me about: 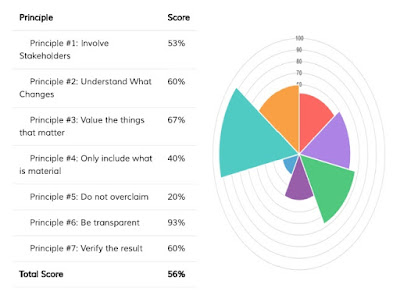 So – an overall ‘score’ of 56% may not seem great. But the tool allows you to benchmark your overall result against a number of others by sector, turnover, and type of activity.

Bench-marking my result against these others in this way suddenly shows that actually 56% means I’m still showing leading practice in how I’m going about reporting my social impacts:

So – all in all, still room for improvement (which stops me getting complacent), but potentially ‘top of the class’?

Posted by Adrian Ashton at 3:02 PM No comments: