"ain't nothing like a Dame", forgotten legacies, and growing lettuces in space... (the future of the co-op movement from a regional perspective)

I was recently invited back to my old stomping ground of Cambridge to speak at the Regional Co-op Council's annual conference - as some may know, I spent several years turning around the fortunes a local co-op and social enterprise development agency there, and somehow initiating some ideas that have since become national flagships... 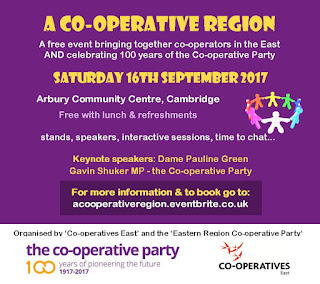 And the invitation was too tempting to pass on: in 1997, The East of England was the first in the country to form a regional co-op forum (which became the regional Co-ops Council model today), and in doing so inspired every other region in the UK to not only form a corresponding Council model, but also informed every region to then go on to create a wider regional social enterprise partnership too! (and I was involved in the forming of both this first regional council, and the subsequent first regional social enterprise partnership too, so nice to go back and see how it was getting on)

The East of England was also the first to create a 10 year strategy for shaping the future of the co-operative movement from a regional perspective (which I still have a copy of!, although sadly just about everyone at the Coops East conference seemed to be unaware of just how influential they've been in shaping the wider movement and beyond through these things in its history...).
Therefore being able to return to remind them of their history and legacy seemed an important thing to do in encouraging the next wave of the 'co-operative revolution'.
(and it was also personally encouraging for me to be able to see some people I originally got to know 15 years ago still active and impacting the world through their roles - Austen and Sally: yes, that's you I'm referring to!)

While the day itself may have seemed to have had too many speakers for some people's comfort (8 main presentations, 2 facilitated round table planning activities, and a break for lunch - and all in the space of about 5 hours), my impression is that many also felt that they wanted more... and my overriding impression was that rather than blinding people with stats and policy headlines, all of the speakers more appropriately drew on stories and histories of their respective co-ops - its stories that capture our interest and imagination much more powerfully, and make it easier to share these ideas with other people, than any set of quantitative data and mapping reports ever can.

So to try and summarise what impressed upon me most from the day means I'll omit some things that others felt were the highlights for them, or focus on some aspects that others felt were more of an irrelevance. But that's part of the joy of blogging - encouraging you to subsequently read others' write ups and form your own view, and a reflection of the diversity of the co-operative movement itself. However, for me the 'highlights' I'd like to share are as follows: 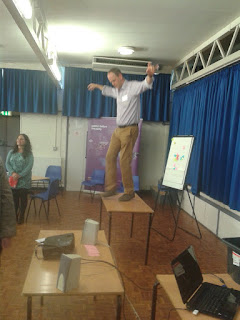 I think my overriding takeaway from the day was that as a movement we have a legacy (and future) that is far more impressive and powerful than most realise, but we risk losing it all if we forget our history and don't keep regularly sharing and reminding ourselves of our stories.

But the whole day was also tweeted and instagrammed about by various other people there - just check out the day's hashtag to see other's pictures and stories via #acoopregion; and Coops East have also uploaded all of the speakers notes and presentations to their website: http://www.cooperatives-east.coop/events/acooperativeregion/
Posted by Adrian Ashton at 3:30 PM 1 comment:

I’m on my way back from London where I’ve just spent 50 minutes chatting with a medium sized charity about what I might be able to offer them if they took me on as a ‘critical friend’ to their senior management team. And I know that for most of the conversation, the charity was principally trying to figure out what a ‘critical friend’ might look like and do, rather than hearing how great I might be for them in that role… (they’ve been asked to recruit one by a one of their funders, but not had any guidance and not had any prior experience of what one is!).

I get the strong impression from some passing references made by the charity’s executive team during the chat that I’ve a relatively low chance of success in getting this work; the contract value means that I won’t really make any money on the work if I’m awarded it; and it’s quite a travel distance from my usual patch around the North West, Pennines, and Yorkshire -  so why did I even consider spending time on drafting the initial proposal and then committing to the cost and time of such apparently excessive travel?

So – a mixture of good manners, the opportunity for business and professional development, and personal values, meant that I’ve just done something that I suspect most of my counterparts would have passed on without a second thought. Perhaps another reason why I’m labelled as being ‘not your typical consultant’ in the worlds of facebook and Instagram?
Posted by Adrian Ashton at 5:04 PM No comments: