crowdfunding grants for your project - the shape of things to come or a dystopian future?

I find myself talking a lot about crowdfunding these days - partly because I'm starting to deliver more training and learning programmes around strategic finance and managing accounts, but also because it seems to be a space where more grant makers are moving into...

I've always held that the main benefit you can derive from crowdfunding isn't about the money, but rather proving interest and demand, and building a tribe of supporters. I've also always argued that it's a lot of hard work to make a crowdfunding campaign a success (most fail to reach their targets, or come anywhere close to them...)

Recently though I've started to notice grant making bodies starting to increasingly move in the crowdfunding space - offering 'top up' grants to groups and projects who raise either a minimum amount, or who offer to match the amounts raised in this way (step forward Power to Change Community Shares Booster, Santander's changemakers, el al). And in some ways this makes sense: grant making bodies only have so much cash to go round, and want to make sure that their money makes the most impact where they spend it. So to have a project that shows it has high levels of public and community support from people already donating to it, would seem to be a good indication that it will do very well in having a body of people already wishing to support it and see it succeed.
And there are also calls from various national sector bodies that even if charities don't integrate crowdfunding into their income generating strategies, everyone should try it at least once... 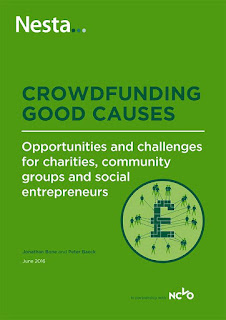 But... crowdfunding can be a fickle game. It takes a lot of time and skill to be successful at it. It's also a form of popularity contest in trying to get a community to support your project over someone else's. And what about those projects and activities which, while we all agree are worthy and needed, are also those which we might struggle to otherwise offer support to if they started crowdfunding?

Crowdfunding can generate all sorts of benefits and unexpected outcomes. It can also be a large waste of time and effort. But is a space that people and funders are increasingly interested in - and if we haven't tried it, how can we have any credibility when we try and subsequently argue that its not for us?

Like Oscar Wilde (or someone like him) famously may have once said - try everything once, apart from Morris dancing; but I'd say just make sure you go into it with your eyes open and don't believe all of the hype...

Posted by Adrian Ashton at 2:15 PM No comments:

on being professionally referred to as a 'tool'...

Throughout my professional life, I've been referred to as being/likened to all sorts of things: Darth Vader, Derren Brown, Shakespeare, a Guru, the A-Team, and even a 'neo-liberal stormtrooper'! 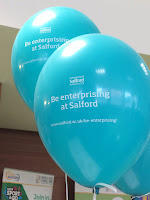 However, my most recent public naming was as a 'tool' in front of 50+ students (and twitter!) at Salford University's launch of their enterprise support programme for students and graduates.

I was there as a long-standing supporter of the University's enterprise support programmes and initiatives (although for the sake of some of my other clients, I should probably highlight that I do also work in a similar role within other universities and educational bodies...). The idea of the evening was to inspire and encourage a new intake of students to consider how enterprise could enhance their future options and opportunities, and to that end there were inspiration speakers, details about grant funding available, and pizza. My task was to get those people attending to have some practical experience of what 'being enterprising' might look and feel like in practice through quick activities and games. 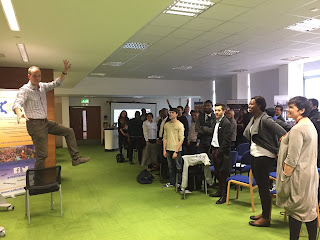 However, what was probably the most important part of the event was the Q&A from students to us speakers - in preparing for what we delivered we could only try and second guess what might be most important and relevant to such a large and diverse group; but having time in the programme for open questions helped us to better understand what people's motivations and priorities were. And it was as part of this part of the event that there was a question about the role and value of advisers to a growing business. Jamil Khalil, the founder of Wakelet and keynote inspirational speaker, suggested that he viewed such advisers as 'tools' - in response, I openly wondered if he meant that in the context of a toolbox, or if it was a reflection of poor business support he'd received in the past...

Thankfully he clarified that it was the former, but it created an opportunity to highlight the importance to any enterprise or startup of needing to take multiple approaches: building your own toolbox of resources including professional advice being only part of what you need - there's also value in some of the startup and business planning processes, and my 'games' highlighted the critical need for both a good network of contacts and self-confidence.

So to my fellow advisers and enterprise supporters out there - let's celebrate and revel in being seen as 'tools' ;-) 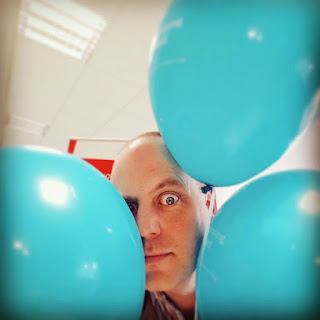 Posted by Adrian Ashton at 10:47 AM No comments: