The highs (and lows) of doing it live...

Ok, so most who are reading this will know that I tweet – if for no other reason that you can see what I’m tweeting in the update sidebar on your screen as you read this!And lots of other people tweet too – some of it funny, some provocative, some thoughtful, some boring... and you may also know that there are lots of conventions and practices t 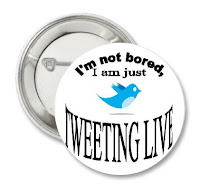 hat have emerged around twitter: the #hashtag, the tweetup, and the tweeting live from events...I've always liked to think that I’m open to ‘experimenting’ with my practices, so when I attended a recent event being staged by Unltd, I took the opportunity to jump onto a wifi network to tweet about the event ‘live’. And other people at the same event did the same. And from my perspective this meant some quite interesting things happened:
* I got to reflect on speakers’ presentations and discussions better because I could instantly follow (via the event #hashtag) what others thought of their points and arguments which helped me better reflect on them for myself

people who I knew wanted to attend but couldn’t were able to get an insight into the emerging themes and issues being discussed, so didn’t miss out

through being able to identify fellow tweeters at the event by searching for tweets with that #hashtag, I got to make contact with more people that I would have physically been able to do otherwise
BUT... all these things came at a cost. All the time I spent tweeting and reading others’ tweets I wasn’t fully listening to the speakers (naughty me!) and it also meant that I spent some of the time staring of my phone instead of being open to starting conversations with the strangers around me.On balance, I’m glad I tweeted live as it meant I got a lot more out of the event that I would have done otherwise – having the opportunity to live tweet again may mean I attend more conferences in the future!

are co-ops the most sustainable form of social enterprise?

Ok, so by the title alone, I’ve already probably upset some people by inferring that co-ops are a form of social enterprise. And I’m not sorry about that – I’ve spoken at national conferences over the years on the relationship between the two, and there are plenty of articles published by academics on the question. For now, let’s just take it that co-ops are a type of social enterprise.

Anyway – back to the purpose of this post: sustainability in the financial sense. Social Enterprises are regularly touted as being the saviours of the economy, society, little kittens stuck up trees, etc and it’s implied from research figures released by Social Enterprise UK that as they’re outperforming private firms, they’re more successful, and by extension more sustainable.

But I was wondering recently about how ‘true’ this might be from the perspective of management cultures: privately owned businesses are about generating profit and so usually focussed on the short-term gains (at a cost of long-term benefit), but social enterprises have this ‘asset lock’ thingy - a mechanism in their legal forms that means in the event of being wound up, the assets its accumulated are given to the local community to ‘carry on the good work’. And that’s all good and proper – after all, the enterprise will have grown and prospered in part at least because of its commitment to doing the right thing by a specific community so those assets were generated in their name.

Now, co-ops kind of pioneered this asset lock thing back in the 19th century under the phrase “common ownership” as a tool to ensure that the members of a co-op could consider that they were only temporary custodians of the venture, that they were managing it on behalf of a future membership so needed to consider the (very) long-term benefits and interest of the business. Their focus is on the generations not yet with us, whereas social enterprises’ is on the here and now. With regard to the impact this has on management’s long-term thinking and considerations, are co-ops therefore playing the longest possible game and so most likely to be the more sustainable form of enterprise?

Posted by Adrian Ashton at 4:14 PM No comments:

As well as updating my experiences, thoughts, arguments and other random ideas here, you can also visit my main website from
this link - www.adrianashton.co.uk