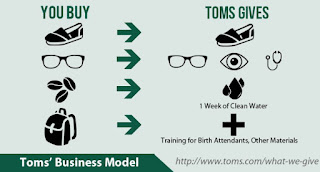 Csr plays a distinct role in the wider fabric of community and voluntary support, but supplements what we choose to do as individuals. If we as individuals start to direct the businesses we buy from as to the causes we want them to support, then we're likely to give less to those causes ourselves: after all, that cause or group will still be getting something from our purchase price, right?
But it's unlikely that any private business's csr will ever equal what we collectively give individually, so this crowdsourced approach to csr may ultimately start to see more of us giving less to charity, and spending more as consumers...
Posted by Adrian Ashton at 1:09 PM No comments: